Cancer screenings save lives. That’s the message that Aleka and David Scott want others to know after David’s own journey with prostate cancer — which remains the most common non-skin cancer in men and is second only to lung cancer in mortality.

After meeting in Portland, Oregon, the Scotts maintained a commuter marriage for 17 years. David traveled to and from Steamboat Springs, where he worked as the vice president of business development for a heavy industrial construction company.

Since retiring five years ago from her role as a senior vice president for a generation and transmission co-op, Aleka has joined David in Colorado. With their mutual love for outdoor recreation, they are both grateful to have settled down together in the mountains.

The couple is even more grateful to have a regional cancer center — the Vail Health Shaw Cancer Center — that provides exceptional care close to home.

For 10 years, Aleka has kept a spreadsheet to track David’s prostate-specific antigen (PSA). An elevated PSA can be caused by many things but can also signal prostate cancer. The Scotts know the importance of being proactive when dealing with cancer, so David began to see their local urologist. A biopsy confirmed that David did indeed have prostate cancer.

It was decided that radiation was the best option for David’s cancer treatment. “Shaw was just clearly the place to do it,” Aleka says.

Although receiving care in Eagle County rather than in Denver removes a geographical barrier for the Scotts and many others, the distance still presented a challenge. “Even though it’s an hour and a half to two hours one way, doing that every day was not an option for us, especially when there is snow on the road,” Aleka describes.

Being able to stay at Jack’s Place, a cancer caring house, made all the difference for the Scotts. David says, “Between Shaw and Jack’s Place, the programs that are offered couldn’t be any more complete and better thought out for a person that’s going through treatment.”

“They just take care of the whole person,” Aleka adds. 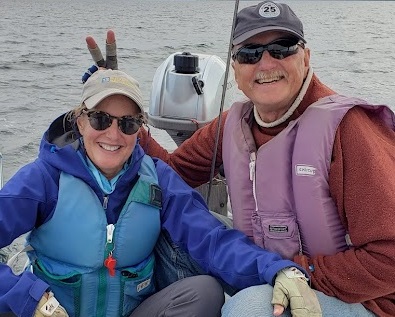 David’s treatment ended on December 20, 2021. In gratitude for the compassionate care they received, the Scotts, along with Joanne Unkovskoy, Aleka’s mother from the William F. O’Connor Foundation, made charitable gifts to Shaw Cancer Center and Jack’s Place.

“We were prepared to pay whatever we had to for a place to stay, and when we could stay at Jack’s Place, we decided to make a donation there,” says Aleka. “What if we hadn’t been able to afford to stay somewhere else? What would we have done? We gave because we wanted to make sure people could come to stay, whether they had the money or not. We were lucky enough to have it, but it could just as easily be that we didn’t.”

The Scotts credit their upbringing for their strong values of philanthropy and helping others. Aleka recalls the stories she’s been told by her grandparents while they were Russian refugees fleeing during World War II. For the couple, it’s a simple message that carries with them: take care of one another.

Since his treatment ended, David has quickly returned to the mountains — backcountry skiing, hiking, and dog walking are a few of their favorite activities.

“I have nothing but the highest regards for the whole staff at Shaw and Jack’s Place. All the programs that exist to make the stay more enjoyable are so wonderful.”David Scott

Like the Scotts, you can ensure our patients have a comforting place to stay while receiving the most advanced, compassionate cancer care.

John Shipp: The Spirit of Perseverance