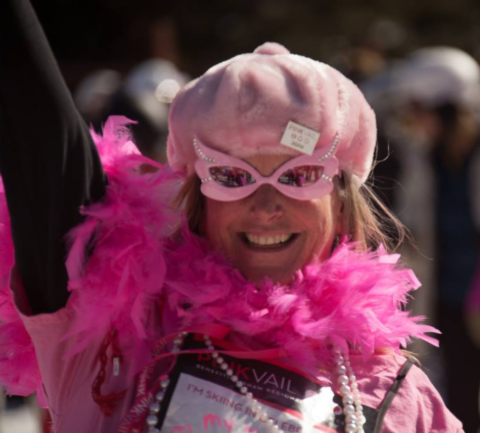 The Story Behind the Name

Heidi Ham was diagnosed with breast cancer in 2012. She received treatment at Shaw Cancer Center and participated in the Spirit of Survival program. Fast-forward to 2020, and Heidi is a few months away from her eight-year mark as a cancer survivor. She participates in Pink Vail on a team with her namesake, Win4Heidi.

As big fans of the New England Patriots, Debbie says that of all the games she and Heidi have attended together across the country, a 2013 Jets/Pats game in New Jersey was specifically memorable.

“This game was incredibly special as it was her first time attending an October Breast Cancer Awareness game as a survivor,” Debbie said. “It was an emotional experience for both of us.”

Prior to the game, Debbie had a dream that she contacted the Patriots and told them Heidi’s story. “I wrote this drama-filled letter asking if they could just play a little harder and want the win just a little more than usual. If they could just do that and win for Heidi, I’d be forever grateful,” she says.

In her dream, they arrived at the stadium to see the Patriots wearing pink lettering on their helmets that said “Win4Heidi.”

“In real life we lost the game,” she added, “but we ended up with a team name for Pink Vail!”

She continues, “We hope that in the game of cancer versus Heidi, we’ll always be able to call it a Win4Heidi.”

Make a gift in honor or memory of someone special, or make a general donation. All funds raised will benefit all patients of Shaw Cancer Center.