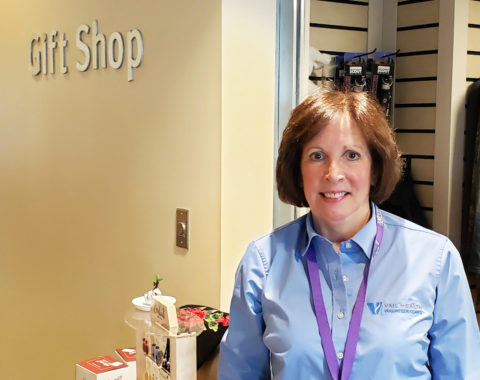 A letter from volunteer and grateful patient Nancy Berg

The series of events that culminated in an emergency appendectomy at Vail Health on December 5, 2019 warrants acknowledging the role that so many of the staff played in helping me that day, both with their professional expertise and the caring way they provide their services.

My abdominal symptoms were not acute, but rather episodic over the past year, with months between the episodes. At a consultation in November with Dr. Stephen Laird at Colorado Mountain Medical, a standing order was placed for an ultrasound to be performed when I was having symptoms, in hopes of finally identifying the cause.

At 9 a.m. on December 5, I called and spoke to the ultrasound scheduler, Maggie. Her warm assurance that they would certainly see me that day started the ball rolling. I arrived an hour later and was registered by Davis. He recognized me as a longtime member of the Volunteer Corps and was truly concerned. His registration process was efficient and I felt warmly welcomed. Within a few minutes, James, the ultrasound technician, came to the Admissions Department to escort me to the ultrasound room. He was extremely professional while displaying sincere concern, given my frustration with my intermittent symptoms. As I described the general area of discomfort I was having, he thoroughly scanned my entire abdomen. Although my appendix was not enlarged to the standard criteria for abnormality, he felt it did not look quite right and called for the radiologist to come to the exam room. Within minutes, Dr. Wenzel was in there with us. He agreed with James’ assessment and ordered a CT scan.

Delya and Tom in CT were also very interested in helping figure out what was going on. As soon as the scan was complete, they walked me to Dr. Wenzel’s office where he showed me the healed sac from some previous rupture of my appendix. Dr. Hammaker was the surgeon on call. He arrived in Dr. Wenzel’s office within minutes, the situation was calmly and clearly explained to me and I headed up to his office for pre-op preparations. Two hours later I was in surgery.

My surgical experience and overnight stay in the PCU continued the positive experience in both the outstanding standard of care and the sincere manner in which all was carried out.

As I head into my 11th year as an active member of the Vail Health Volunteer Corps, my appreciation for Vail Health and my commitment to support the entire organization is greater than ever.

Our Volunteer Corps makes an on-going difference by caring for everyone who visits us.