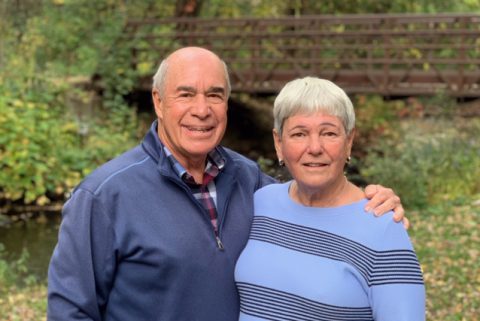 Greer and Jack Gardner first made their way to Colorado 40 years ago after relocating from Pennsylvania to open a new office for Jack’s law firm.

The couple loves the mountains and skiing, and it’s what brought them to permanently make the Vail Valley their home over 20 years ago.

The high school best friends knew they would begin a lifelong journey together from the moment they met. “I came home one day, and I told my mother that I had met the girl I was going to marry,” shares Jack.

After receiving excellent care at Shaw Cancer Center, Jack joined the Shaw Outreach Team, where he served for eight years, and helped create Jack’s Place. Shortly after he joined the board, Greer was diagnosed with breast cancer.

She describes her cancer survival story as “a very positive one.” Greer explains that it’s early detection that saved her life. After going in for her annual mammogram at the Sonnenalp Breast Center, her cancer was quickly detected, diagnosed, and treated within three months.

Greer and Jack are supporting Shaw Cancer Center into the future with an estate gift. “Planned giving allows us to leave something larger than we would during our lifetime. Shaw will be a beneficiary of our estate, and we’ll be remembered in some way. It makes you feel good,” Jack adds.

Giving has always been an important value in both Jack’s and Greer’s lives growing up. The couple came from families who were able to give back, and they realized the benefits of being generous. “Every Christmas, when I was a little kid, my father would adopt a family to care for,” Greer describes. “He would bring me with him to buy toys and food for them for the holidays.”

Their ways of giving go beyond financial support. In addition to Jack’s role on the Shaw Outreach Team, Greer has also volunteered at the Shaw Cancer Center. Beyond Vail Health, their role in the community extends far into many other organizations, such as Bravo!Vail, Vail Valley Foundation events, and Vail Health community partner Roundup River Ranch, where Greer is an active volunteer and board member, and Jack serves as chair on one of the operating committees.

“We very much feel a part of Vail Health and Shaw Cancer Center. We’ve volunteered many hours over the years. Our commitment is much more meaningful with that investment of time,” Jack says.

Outside of their time volunteering, the Gardners are enjoying their retirement. They stay active and travel as much as possible. A day out on the golf course is also a day well spent. When they’re able to, they love to see their three grandkids and two grand-dogs. They’re hoping for a return to normalcy soon to make all of these activities possible once again!

“Planned giving allows us to leave something larger than we would during our lifetime. Shaw will be a beneficiary of our estate, and we’ll be remembered in some way.”
Jack Gardner

Like Greer and Jack, make a commitment today through planned giving that will leave an impact beyond your lifetime.