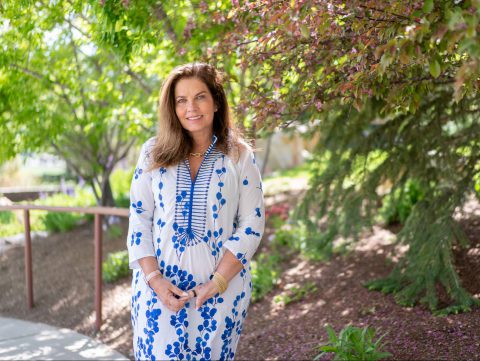 “The word cancer frightens people. When you’re diagnosed with cancer, or Multiple Sclerosis (MS), or anything, there’s some stress associated with that diagnosis,” she says. “The people that work with you make a big difference.”

An Injury That Paved the Road to Vail

Alexandra grew up in Paris and moved to the United States for college. She earned an undergraduate degree from Tufts University in Boston, a master’s degree in Communication from Emerson College, and an International MBA from the University of Miami. She enjoyed a successful career in finance and investing, and along the way, she met her husband, Ron, a lawyer. Together, they raised two sons.

Alexandra enjoyed skiing and racing as a child until a side slalom injured her knee. A friend introduced her to Dr. Richard Steadman, who performed her first knee surgery in Lake Tahoe, where he lived at the time. She became fast friends with Dr. Steadman and his family.

In 1991, Dr. Steadman moved to Vail. Alexandra’s ongoing knee injuries, her friendship with the Steadman family, and her love for winter skiing made purchasing a home in the valley an easy decision. Being able to share her passion for skiing with her family cemented the move.

“I just love the atmosphere, and I love the people,” Alexandra says.

When she was first diagnosed with MS in 2013, Alexandra sought treatments at three different centers near where she lived in Florida. The staff often seemed rushed. She also went to a large hospital in California that sees over 200 people daily. The constant rotation of patients in and out during her long infusion treatments for MS left Alexandra feeling like a number, and she knew she needed to go elsewhere.

“When I started going to Shaw Cancer Center for infusion therapy, I was amazed. The staff is so caring. They get to know you and take care of you,” she says.

When she was diagnosed with breast cancer a year ago, Alexandra knew where she would receive her radiation treatments: Shaw Cancer Center. She had researched the doctors and was impressed by their backgrounds and experience. While at Shaw, she took advantage of nutrition sessions, a body analysis, and the gym through the Spirit of Survival program.

“It’s nice to see that this little valley has such good care overall,” she says.

Ensuring Quality Care for Others

Alexandra’s first mammogram after surgery to remove the cancer was clear, and she’s scheduled to get an MRI this fall.

After getting to know patients at other centers, she realized not everyone had the means or access to some of the treatments that she’s been fortunate to receive. She supports Shaw Cancer Center to ensure exceptional, compassionate care and state-of-the-art technology continue to be available into the future.

“At Shaw, you don’t feel like you’re in a hospital. You feel like you’re part of a community. The staff is wonderful, and you can tell that they treat everybody the same. That’s why I decided to give to Shaw Cancer Center,” Alexandra says.

“When I started going to Shaw Cancer Center for infusion therapy, I was amazed. The staff is so caring. They get to know you and take care of you.”Alexandra Mastriana-Solal

Your generosity will help ensure that award-winning cancer treatment is available to residents like Alexandra in our mountain community.

The Coyers: Making a Positive Impact on Schoolchildren

Read Next
Colorado Gives Day is ON!
Now through Dec 6, 2022, donations will be enhanced! Give where you live to help elevate health and wellness in our mountain communities.Learn More
Share This